On Saturday, May 14, The Brandcenter at VCU graduated the 89 members of the Class of 2022.

Brandcenter Executive Director Vann Graves delivered the opening remarks, addressing the adversity the Class of 2022 faced navigating graduate school during a pandemic. He applauded the graduates for their perseverance for having accomplished what is already a challenging and rewarding program through tremendous times of uncertainty and difficulty. 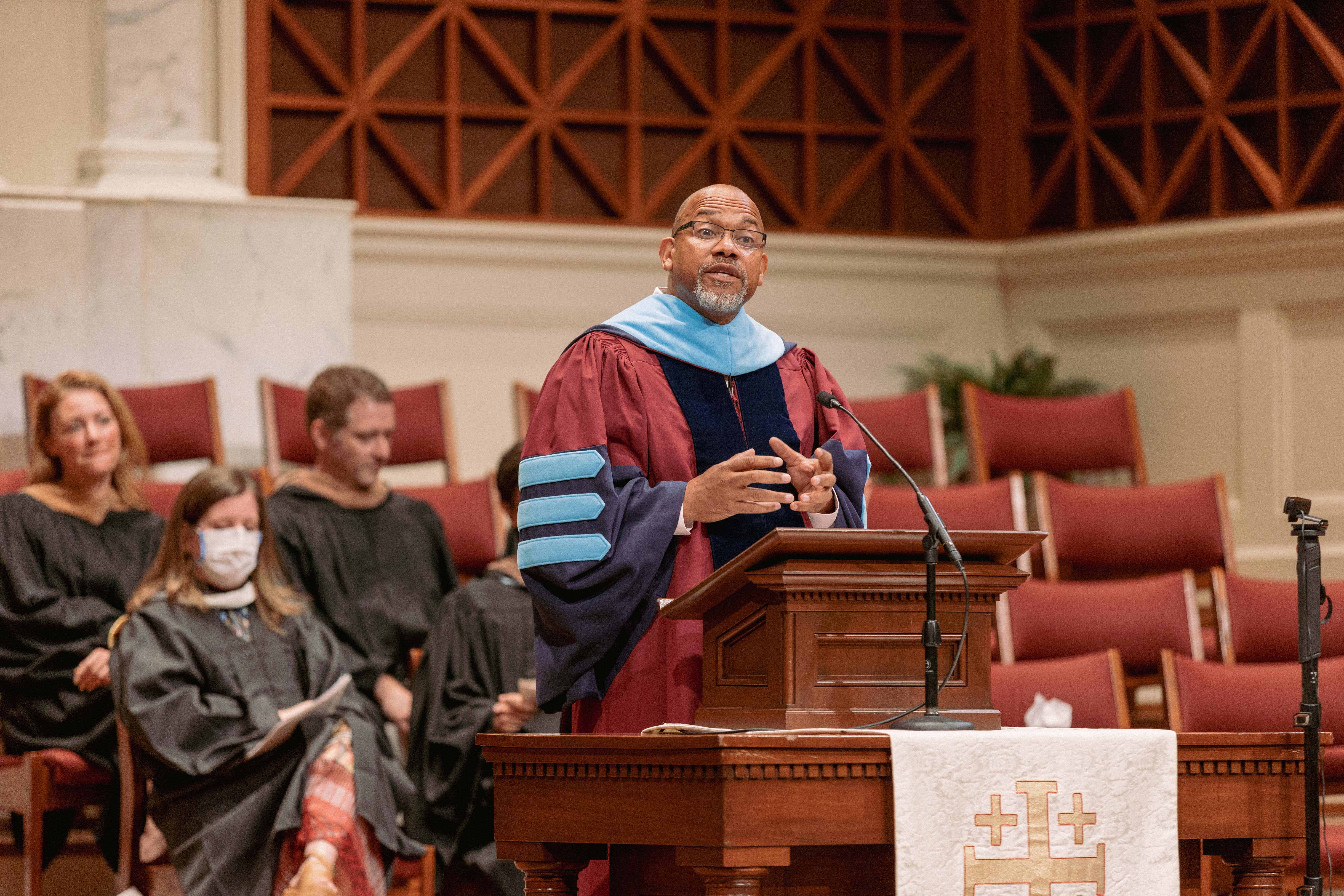 Hermon Ghermay, Global Chief Culture Officer of Mediabrands and Brandcenter Director’s Council member, attended the commencement ceremony as a special guest and emcee. In her brief address, she mentioned how impressed she was with the graduating class after looking through their portfolios and encouraged our graduates to be bold as they take their diverse gifts and talents into the world. 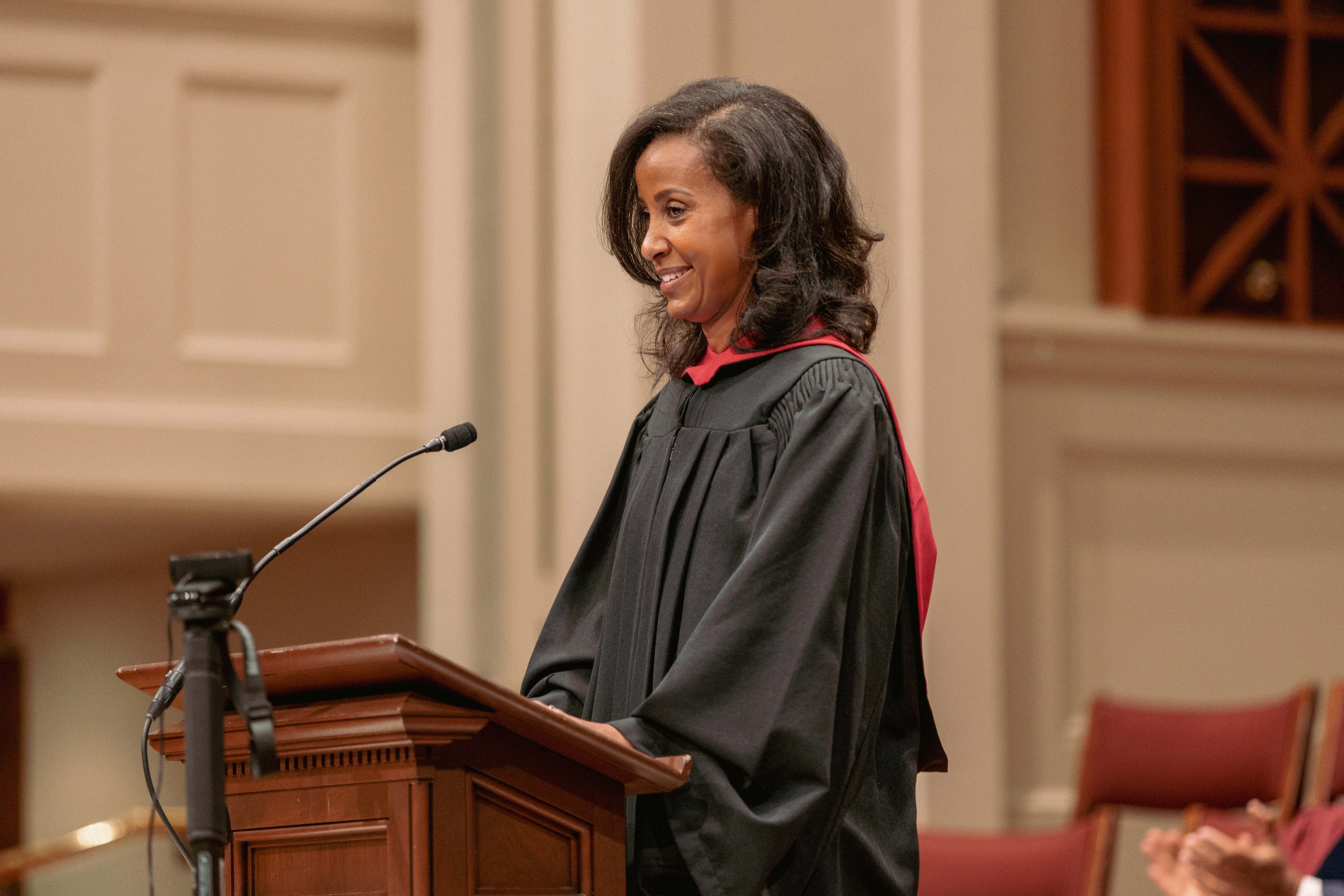 Each year, the graduating class nominates one of their classmates to speak during the ceremony. This year’s student speaker was Craig Kissoon (CW, 2022). Craig spoke about the diversity of perspectives among his classmates, how uncertainty has been the underlying theme of the class’s time at Brandcenter, and how through all of the uncertainty, they persisted and will continue to in the future.

“One of the most beautiful things about the Brandcenter is how much it values the diversity of perspectives. Everyone graduating today got into this school because we each brought a different perspective to this experience. Each of us has had a different journey here. How then do you find a common thread among such a bright and eclectic group? One thing that unites the class of 2022 is uncertainty,” Craig said. “Every one of us rolled a dice. We took a gamble. We looked uncertainty in the eye and persisted. And this school, these students, and this faculty have done it time after time over the last two years with the utmost courage, grace, and integrity.”

He also shared his personal journey to the Brandcenter, the revelation he had during his time here, and his confidence in his classmates to take on whatever challenges or uncertainty they will face in their careers and their lives beyond the Brandcenter.

“When I graduated college in 2016, I was rejected from nearly every copywriting job I applied to. For four years, I was told no over and over and over again. When I finally started the Brandcenter, I naively thought I would know exactly how to be a copywriter when I graduated. What I truly learned here was that no one knows what they are doing. What makes our industry cool and so hard to explain is that it sits at the intersection of culture, media, technology, and design. Areas that are highly subjective and constantly evolving. Our industry is not about finding the ‘right’ answers because there is no such thing. Instead, we get to be the ones who use our art, stories, and perspectives to shape what people see, hear, and experience in the world. In our own way, we get to help people find comfort and amusement, community and solidarity in an otherwise uncertain world. And I cannot think of a group of people more equipped and trained to embrace that challenge, that uncertainty, than the class of 2022.” 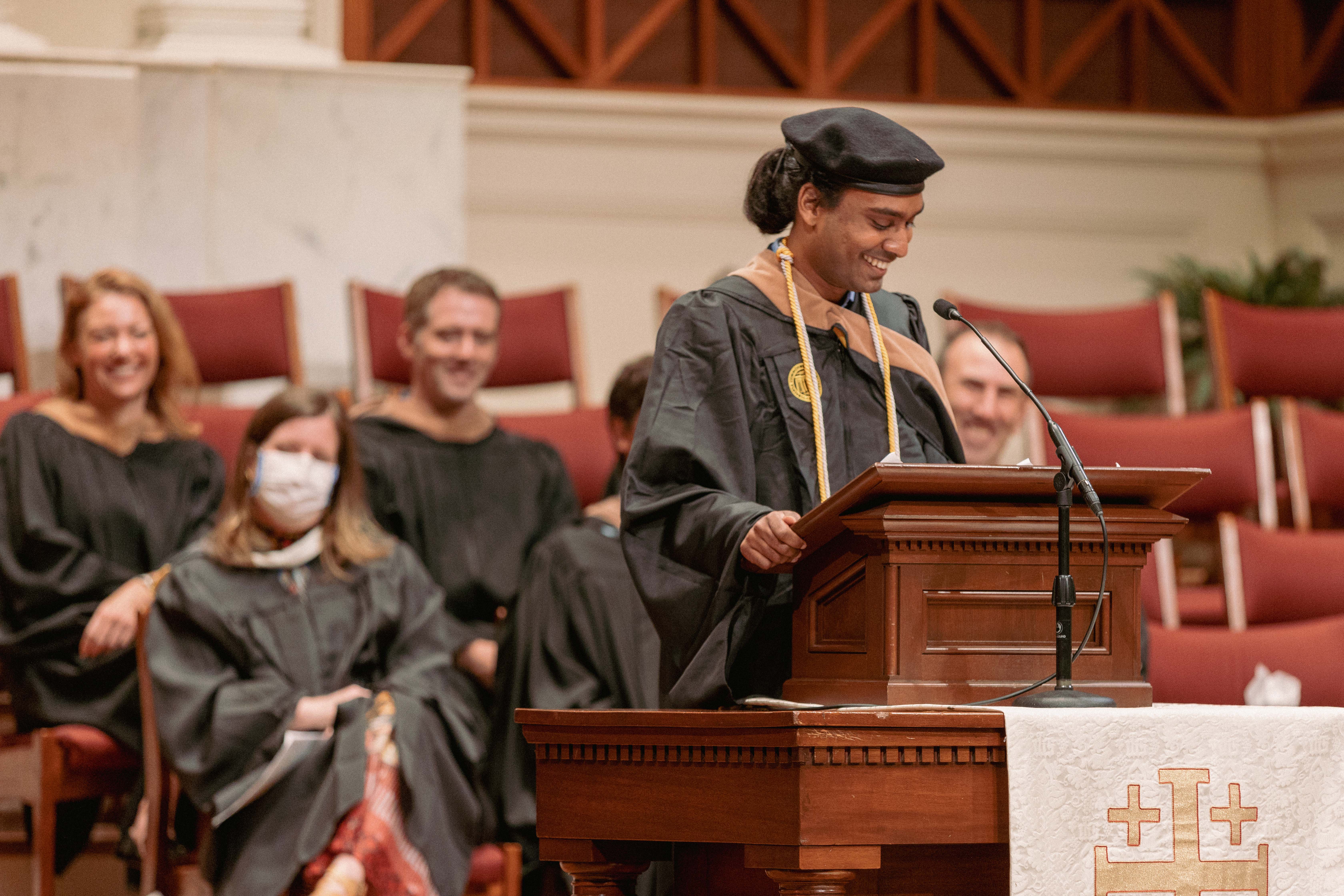 In his keynote address, Philippe spoke about how vital the skills our students gain during their time at the Brandcenter are and the importance of communications—especially in the past two years and with recent events in our world—when information, understanding, and empathy are needed more than ever.

“Every company and organization today is looking for help in becoming more directly accessible to their users, more precise and data-driven with their communication, as well as better able to create ideas, engagement, and experiences that have resonance in a very complex and fast-moving world. A world where technology and culture are constantly colliding, in ways that are exciting and create immense value, as well as ways that are not helping public discourse, or necessarily making the world a better place,” he shared.

He challenged our graduates to always “set out to put your views and your values, as well as your great skills as communicators, to practical use in the world,” and to have “confidence that what you do as communicators and marketers matters, and that it can make a difference in the world.” 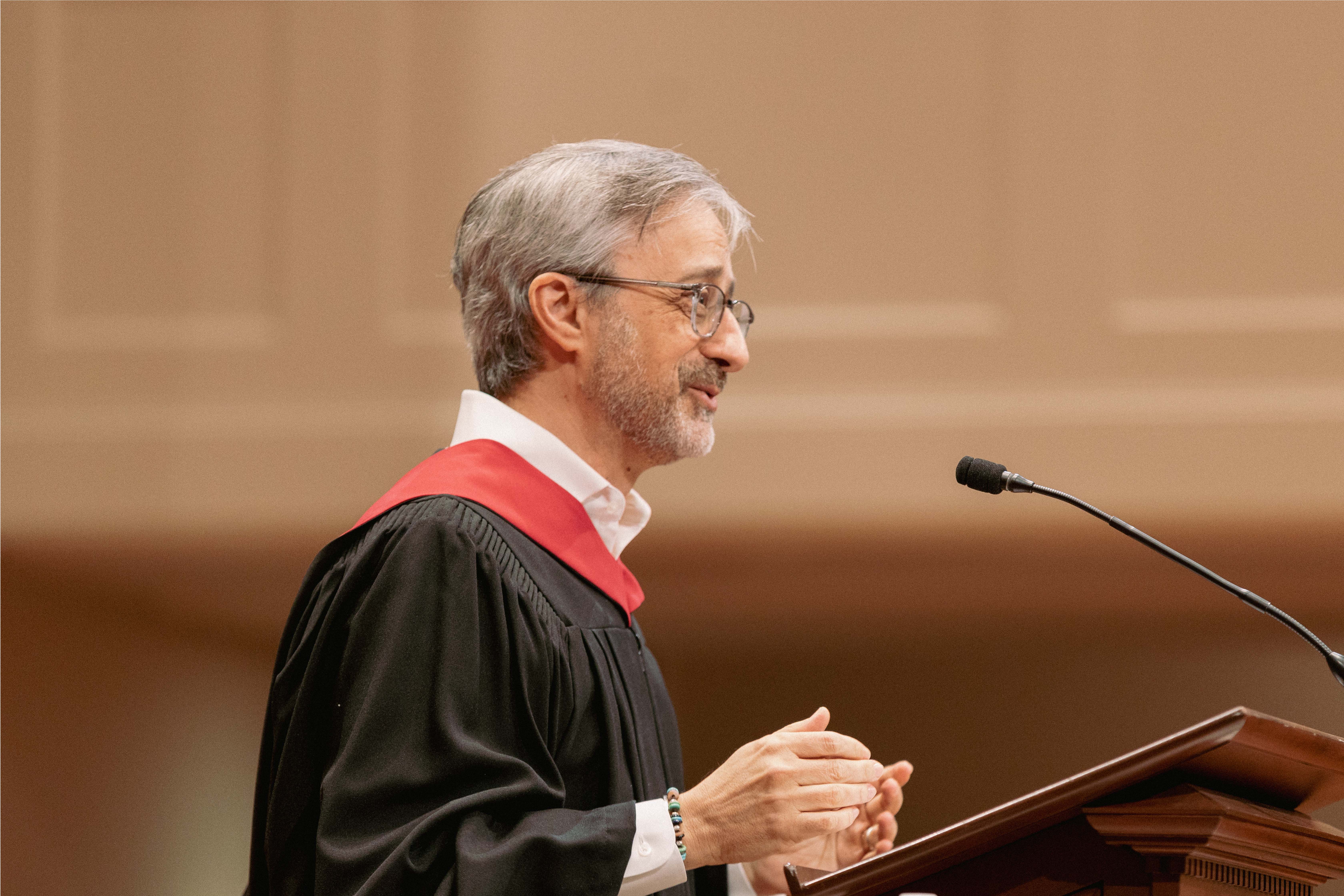 Following Philippe’s address, two students were named Student Initiative Award Winners, recognized for their character and leadership during their two years at the Brandcenter.

Ira Birch (XD, 2022) was the first student recognized. Professor Andrew LeVasseur read, “When we think of a leader, we often think of a person who leads from the podium, who commands a room, who is boisterous, charismatic, and is visibly in command of the situation; quick to organize and delegate, first to be recognized and rewarded. Today, I want to honor the quiet forces among us, the introverts, the understated, those that ‘fly-under the-radar,’ the shy geniuses, the humble saints … those who don’t get enough of our attention, recognition, and the credit they deserve for the impact they make.”

“Yes, Ira is a quiet force,” Andrew continued, “but Ira is also a powerful force. Ira is a shift in the tectonic plates, while we are distracted by the prevailing winds. When the assignment called for a liferaft, Ira brought a boat.”

The second student presented with the Student Initiative Award was Craig Kissoon (CW, 2022). Professor Tom Scharpf said, “This is a class of special students, who endured two of the most difficult years in this program’s history. But like most things, we are not defined by the misfortunes that happen to us. We are defined by how we respond to them. Each student here deserves high praise for persevering through what is already a very difficult program. And while there are many who are worthy of accolades here today, I am here to speak of one in particular.”

Scharpf continued, “This person struck me with their thirst for knowledge and feedback since the first day I met them. This person’s sense of curiosity is matched only by their kindness and generosity of spirit. This person has not just an appreciation for different points of view, but an unending hunger for them. If this person could bottle their positivity, it would have a street value unsurpassed by any drug. This person worked on no fewer than 8 projects in classes of mine over the course of two years here. This person was reviewed by their peers on every project in my classes and was never docked a single point by any partner along the way. An incredible fete. This person never stopped trying to be better. This person never let their teammates down. This person was outworked by no one. This person embodies the spirit of this institution through their creativity, their collaboration, their curiosity, their empathy, and their kindness. This person is Craig Kissoon.” 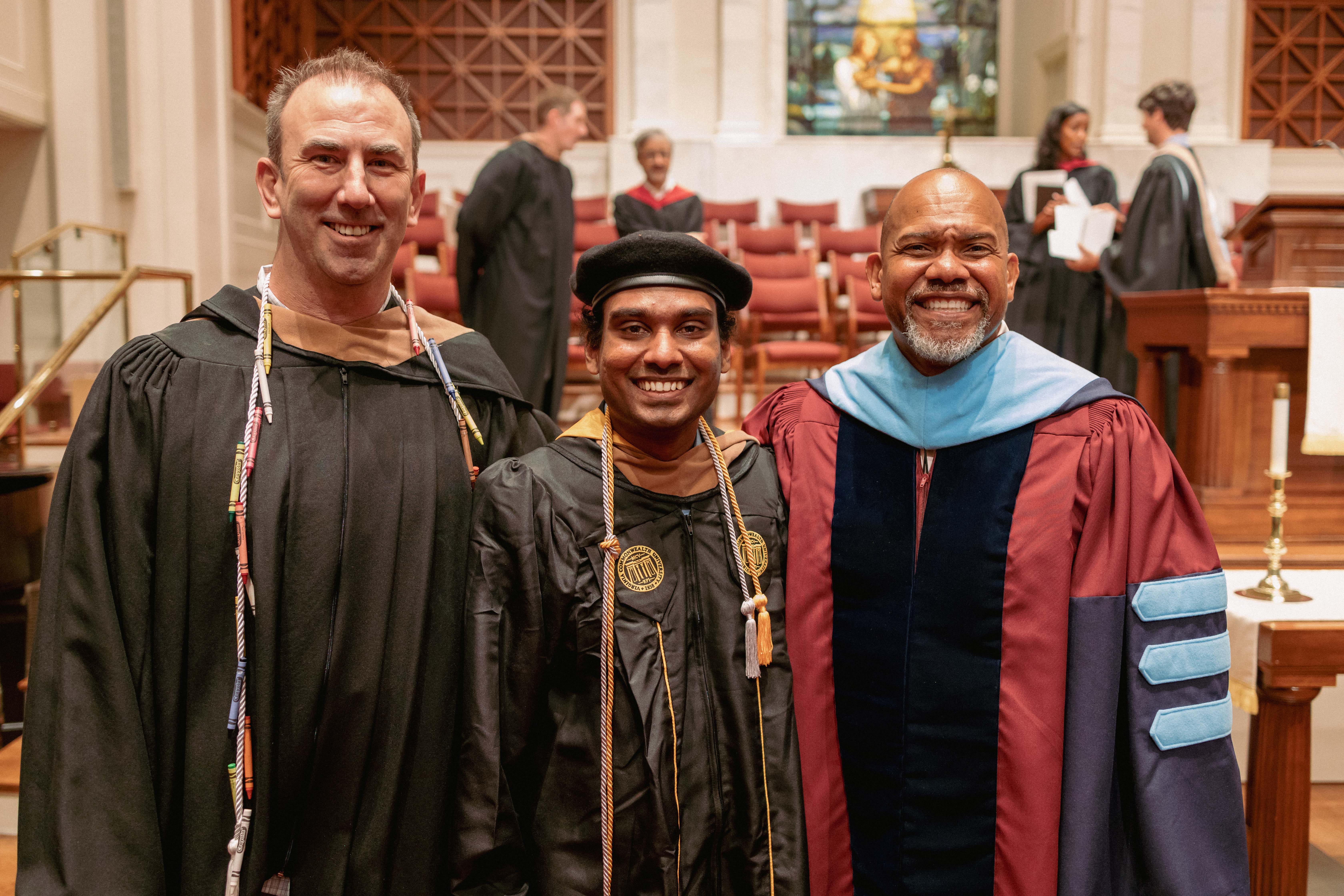 After all graduates received their diplomas, they received a standing ovation from those gathered to celebrate them and this tremendous achievement.

Executive Director Vann Graves closed the ceremony by sharing some of the advice our graduates had contributed to the final prompt on the Brandcenter Whiteboard (a collective, community white board in the basement where students post daily prompts).

The final prompt of the year was, “If you could tell yourself one thing on the first day, what would it be?”

Here are a few of the responses that Vann shared:
“There’s always someone better and that’s okay and normal.”
“You’ll find friends in the least likely places.”
“You will mess up a project. Get over it and move on! It’s okay!”
“You will learn more from your peers than your professors.”
“It was all worth it.”
“This was meant to be.”

Yes, it was all worth it. And, yes, it was meant to be. Congratulations to the Brandcenter Class of 2022.

Visit the Brandcenter on social media to view more photos and videos from the 2022 commencement ceremony: Instagram, Facebook

About the 2022 Commencement Guest Speakers

Philippe Krakowsky / CEO of Interpublic Group / Keynote Speaker
Prior to being named IPG’s CEO, Philippe was the company’s Chief Operating Officer, managing business operations across all of Interpublic, with direct oversight of IPG’s independent companies Acxiom, Carmichael Lynch, Deutsch, Hill Holliday, Huge, Kinesso, Matterkind, and R/GA. During that time, Philippe was also Chairman of IPG Mediabrands. Over the course of his nearly two-decade tenure at IPG, Philippe has also led the strategy, talent, communications, and business development functions for the holding company.

During his long tenure at IPG, Philippe also served as Chief Strategy and Talent Officer. Prior to being named COO, Philippe was also CEO of Mediabrands. In that role, he strengthened the group’s leadership position in digital and data-driven marketing and increased its collaboration across the network. Since joining IPG in 2002, Philippe has implemented major strategic actions that have helped IPG become an industry leader. These include the decision to embed digital and emerging media capabilities across the group’s portfolio, the creation of both Mediabrands and IPG’s Healthcare Council, and the acquisition of Acxiom.

Originally from Mexico, Philippe holds an A.B. from Harvard University. He’s been inducted into the American Advertising Federation’s Hall of Achievement, the premier honor for marketing services professionals under age 40.

An Eritrean immigrant and Harvard graduate, Hermon is an accomplished leader and industry advisor who has spent her career building strong team cultures that enrich team members and drive business results. She currently sits on the Director’s Council of the VCU Brandcenter, the premier graduate school for advertising and communications, and is the lead Director on Education and Pedagogy for the Council.

The Tradition of the Beret
The tradition of wearing berets began with the very first graduating class in 1998. While a lot has changed over the years, this tradition lives on.

John Adams, former President of The Martin Agency, gave the following remarks during that first commencement, “This school is not like other advertising or marketing schools in the country. As a result of that, you are stronger, more focused, better prepared, and tougher than graduates from most other schools. You’re an elite group. Like the special forces of advertising and marketing. Like the Green Berets. Consider this a school for marketing’s special forces.”

For our graduates—like the first graduating class 24 years ago—the beret is a symbol of your membership to this elite group. In the end, the reason why the Brandcenter is so special is because of its alumni, and you’ve officially joined their ranks. It is now your responsibility to join your fellow alumni in setting the standard for all who follow.